One Belt One Road

The Belt and Road Initiative , known in Chinese and formerly in English as One Belt One Road (Chinese: 一带一路) or OBOR for short, is a global infrastructure development strategy adopted by the Chinese government in 2013 to invest in nearly 70 countries and international organizations. It is considered a centerpiece of Chinese Communist Party (CCP) general secretary and Chinese leader Xi Jinping’s foreign policy, who originally announced the strategy as the “Silk Road Economic Belt” during an official visit to Kazakhstan in September 2013.

“Belt” is short for the “Silk Road Economic Belt,” referring to the proposed overland routes for road and rail transportation through landlocked Central Asia along the famed historical trade routes of the Western Regions; whereas “road” is short for the “21st Century Maritime Silk Road”, referring to the Indo-Pacific sea routes through Southeast Asia to South Asia, the Middle East and Africa. Examples of Belt and Road Initiative infrastructure investments include ports, skyscrapers, railroads, roads, airports, dams, and railroad tunnels.

The initiative was incorporated into the Constitution of China in 2017. The Chinese government calls the initiative “a bid to enhance regional connectivity and embrace a brighter future.” The project has a target completion date of 2049, which will coincide with the centennial anniversary of the People’s Republic of China (PRC)’s founding. 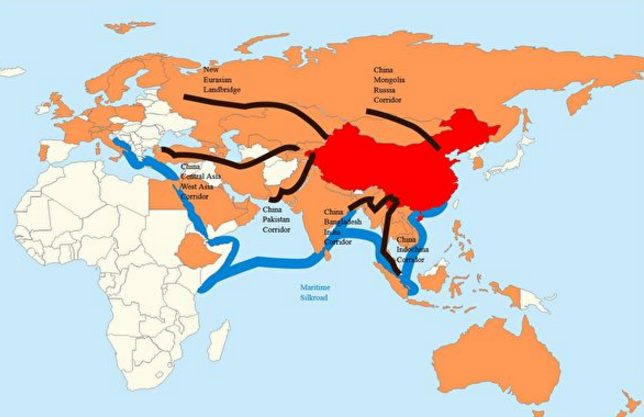